The Walter Roth Museum of anthropology 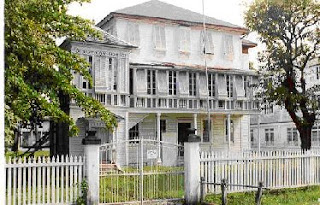 Fish trap and Arrow and Bows
These are all hunting and fishing technology that has been introduced by the Amerindians. The fish trap varies in size and is designed to catch different sizes of fishes.

Amerindian Burial beliefs, practices and mortuary Ritual
Amerindian pottery found at burial sites often displays evidence of mortuary practice and belief in a spirit world. As evidence of this, burial urns were decorated by painting symbolic patterns and figures on them. At other times ceremonial figures of animals related to the shaman and the spirit world were attached to the urn. These figures included the frog, monkey, king vulture, and tortoise. Of these figures birds are associated with flight and the sky while animal figures are associated with either shaman or the under world. 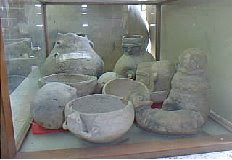 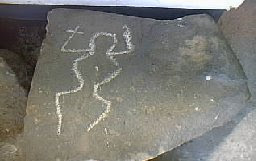 Enumerative petroglyph- found in the Demerara River
Matapi
The cassava squeezer or matapi which is its true carib name is found throughout the Guianas and far westward as the upper Rio Negro. It was known in Suriname as the Carib snake. An interesting legend saw that the first Arawak man who observed the motion of a snake while swallowing its prey and the directions of the lines upon its back formed the matapi expressing the poisonous juice of the cassava (manioc) the matapi consist of a head, mouth, body and an ankle. The matapi can be made from itiri or mukru. A miniature form of matapi is used for extracting the oil from the crabwood (carapa) nut and the kokeret ( maxillama) seed.

Stone Chip Cassava Grater
The making of a cassava grater can be divide into four parts : The preparation of the board by men, the making of the stone, chips by women, their fixation into it by men and women, in the final touches by men, To get the board a man will kill a tree (one of the simarukas) cut off a block 2 or 3 feet long from the outside part and square it down to a piece from 15 to 20 inches wide and about 1 inch thick making the front and the back slightly concave and convex. Afterwards a diagram is drawn infront of the board with a finger dipped in a vegetable dye. A particular type of stone (aporphyry) is used which only comes outer crop that runs across the bottom of the Essequibo River and that can only be obtained in the dry season. After the stone into chips they are inserted in a diagonal pattern into holes drilled into the board with a pointed bone.
Posted by HST 226 students at 2:37 PM