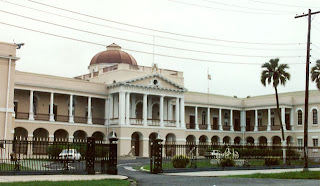 Public buildings also known as Parliament building was established in 1837. It was designed by Architect Joseph Hadfield and was handed over to the British Colonial legislature on the 5th August, 1934. The Parliament Buildings is where the National Assembly of Parliament in Guyana and its committees meet. It is one of the buildings in Guyana with the finest architecture. The building is housed in the heart of Georgetown and neighbours the Stabroek market and the Demerara River. The building have the features of … dome, two ..a … and library.
The Parliament library was established in 1998 prior to the building opening in 1834 with help from the National Democratic Institute. This is an international organization that receives funding from USAID. The … having a library at Parliament came from the former clerk of the National assembly, Frank Narine.
The aim of the Library covers the fields of interest that provide lawmakers with the necessary materials they may need to perform their duties in parliament. When asked what is so interesting about Parliament’s library, the response was, “this unique library house documents that cannot be found anywhere else…” documents such as the vebatum record which are debts that take place in the National assembly.
Posted by HST 226 students at 4:12 PM